Windrush Day - Events organised by the NWJS since 2018

'Windrush Day' has been recognised on 22nd June to remember the landing of Empire Windrush in 1948 at Tilbury Docks, with passengers mainly from the Caribbean who were invited to Britain to help rebuild the country, as so many British men were killed in WWII.

Each year the North Wales Jamaica Society joins with other organisations to recognise Windrush Day with a special event. 2020 was an exception, we were unable to hold a public event, so we focused on research into the stories of the Windrush generation in North Wales.

This year decendants of the Jamaican's who came to the UK in those early years and have links with Wales, and others who have researched and written about the stories and feelings of the Windrush generation came together for a special event:

The event shares stories of the departure from the Caribbean, and arrival in UK of an amazing group of people, who determined the they would come to the UK to help the 'Mother Country' and the immense contribution that they, and those who came to Britain later and their descendents, have made to life in the UK and back home to the countries they left and continued to support. 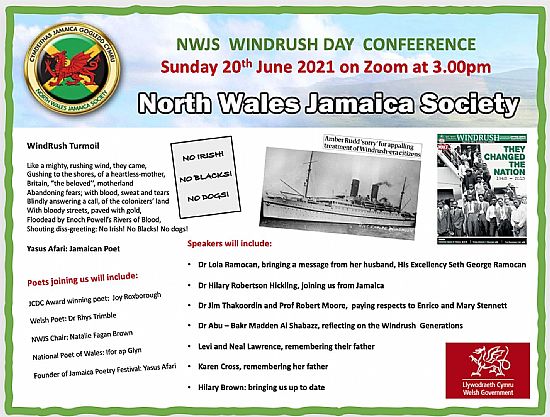 The aim of the Windrush Day Conference 2021 was share stories to raise awareness of the significant contributions made by members of the 'Windrush Generations', promoting the historical, economic and cultural contributions, with presenters from range of backgrounds.

The unedited Zoom recording of the Conference can be found here

Find out more about the arrival of Empire Windrush in this History Today article : Click here