Exploring links – the tradition of Eisteddfodau in Jamaica

Miriam Jones Isherwood, who is a member of the North Wales Jamaica Society recalls her schooling days in Jamaica:

"1963 was a momentous year in the life of our family – the year we left behind city life in Manchester for life in rural Jamaica, a small Caribbean island which had been granted independence from British rule a year before.

My father, Pearce Jones, was the third son of Welsh parents.  Nain was born in Patagonia, and arrived in Liverpool at the age of 15, with her parents and brother, able to speak only Spanish and Welsh.  She subsequently met and married Taid.  Their three boys, who all became Congregational Ministers, were brought up in a Welsh speaking home, and attended Great Mersey Street Welsh Congregational Chapel in Liverpool.

By 1963 my father had been ordained for 15 years and was minister of a congregational church in Old Trafford, Manchester. During his nine years there, immigration from the British Colonies and Commonwealth had been encouraged to fill gaps in the labour market in the post-war period.  The make-up of the neighbourhood and congregation altered as people of mainly West Indian origin were welcomed into the church community.  Life outside the church was not always so welcoming for the new arrivals to the mother land!

In 1963 an approach was made to my father under the auspices of the Commonwealth Missionary Society, to take charge of a pastorate of three churches in the parish of Clarendon, Jamaica (parishes in Jamaica being equivalent to counties in Britain). He would be based in the town of Chapelton where Salem, the largest of the three churches, was situated.   The work also involved the chaplaincy of a secondary school, Clarendon College (CC), set up in 1942 by the Reverend Lester Davy, (supported by Rev. Trevor Hughes, an earlier Welsh minister of Salem) and some part time teaching of Bible Knowledge at CC.  My parents, Pearce and Catherine, had five children, ranging from eight to eighteen years, so the decision required a lot of thought and prayer.

It was against this background that we, a family of seven, set off for Southampton in September 1963, to board the S.S. Ascania, an Italian banana boat en route for Jamaica. Thethree week voyage was exciting for us children, whose previous experience of the wider world was limited to a month’s camping in Borth y Gest every August!  We arrived in Jamaica in October 1963 in the wake of Hurricane Flora and were soon absorbed into the life of the church and school in Chapelton.

An annual feature of school life at that time was a competitive cultural festival, widely known as ‘Eisteddfod’..  Why eisteddfod?   A recent Jamaican visitor to the Flint and Denbigh show, on overhearing a conversation relating to the upcoming National Eisteddfod, innocently asked the question, ‘Do you have eisteddfod in Wales too?’

The first recorded mention of Eisteddfod in Jamaica was in 1897, when the Institute of Jamaica hosted an eisteddfod to mark the Diamond Jubilee of Queen Victoria.  Indeed, I am indebted to the current Executive Director of the Institute, Vivian Crawford, for much of the history which follows.

The holding of Eisteddfodau is not the only link between Jamaica and Wales.  Evidence of Welsh influence on life in Jamaica is still evident on the island.  Sir Henry Morgan, the well-known buccaneer, went on to become the Governor of Jamaica.  Low stone walls can still be seen in the rural parishes of St Ann and Trelawny.  Welsh slate was used for roofs and school slates.  Welsh place names abound – Anglesey and Llandillo in Westmoreland, Bangor Ridge in Portland; Cardiff Hall and Llandovery in St Ann; Denbigh, Jones Town, Jones Depot and Morgan’s Pass in Clarendon; Flint River in St Mary and Llandewey in St Thomas.  The Kingston campus of the University of the West Indies is called Mona. The small community of Pennants in Clarendon dates from the sugar estates owned by Richard Pennant, 1st Baron Penrhyn, owner of the Penrhyn Estate on the outskirts of Bangor, North Wales.  He owned six sugar plantations and hundreds of enslaved African workers, many of whose descendants still bear the surname Pennants as a consequence.

But I digress!  Principal of Mico Teacher Training College in Kingston from 1924 – 1958, the late Mr Arthur J Newman, was the prime mover behind the initial spread of eisteddfod in Jamaica, although it is unclear as to why he took this initiative. House systems were introduced into the college by Newton, and when students graduated they took this concept into the schools where they taught. The first Mico Eisteddfod was held on June 14, 1924.  The judge of the tune writing competition was one Mr Astley Clerk, a Music Bookshop Proprietor, who donated a silver cup for an original musical work.

The 1925 Mico Eisteddfod was held in October and categories included essays, short stories, poems, melodies, glees, quartettes, solos, elocution and drawings.  The sixth eisteddfod, held in 1929, was so popular visitors had to be turned away!  Among those present were Mr C L Stuart, tutor, of whom more later, and Rev. Armon Jones, Methodist Minister – possibly another Welsh connection?  Between 1935 and 1955 regular reports of eisteddfodau in schools outside Kingston appeared in the Daily Gleaner.  ‘Thus,’ as Vivian Crawford says, ‘the seeds were sown for what we know today as the Jamaican Cultural Development Commission.’

To return to a more personal level – what of Eisteddfod at Clarendon College?  In 1959, a Welshman by the name of Haydn Middleton left Wales with his new bride and started his teaching career at CC.  Born in Tonyrefail, son of a miner, Haydn was conscripted as a Bevin Boy during the war and spent three year underground.  After the war he graduated in geography and geology from UCW, Aberystwyth.  At Clarendon College, this Welshman,described in his obituary in the Guardian in April, 2017 as a ‘courteous, caring man, with boundless energy’ who loved ‘rugby, singing and Wales’, met up with the formidable headmaster C L Stuart, known affectionately to students as Pops Stu.  Pops saw his opportunity to introduce the eisteddfod ethos fostered during his time at Mico College.  According to a past student of CC, ‘Middleton’s greatest gift to Clarendon College was the introduction of Eisteddfod, that Welsh Festival of Festivals.’  It has to be said that his attempt to introduce rugby to the fourth form boys met with less success – they thought it a ‘silly game’! Interestingly, the aforementioned Rev. Lester Davy, founder of Clarendon College was a former Mico student.  Had he not been tragically killed in a rail accident six weeks after the school opened, the Mico influence may have emerged earlier.  Who knows?

Another past student of CC recalls eisteddfod as an inter-house competition of music and dance, divided by age groups.  Boys and girls competed separately and only girls did country dance.  Elimination rounds were followed by a final.  Piano playing and choral singing wereincluded and songs could not be ‘pop, or what was heard on the radio.’!

Although not a definitive history of Eisteddfod in Jamaica, this exploration of links between Jamaica and Wales has found them to be enduring.  Some of the Welsh influence stems from colonialism and slavery, and as such was a product of commerce, but the contribution of individual nonconformist ministers and educators originally from Wales to the cultural heritage of Jamaica cannot be denied. The recently established Jamaica Wales Alliance has been formed to explore the creation of sustainable links between the two countries, and the North Wales Jamaica Society is active in forging such links through cultural activities and education.

My thanks go to the following for contributing information used in this article:

Vivian Crawford, Executive Director of the Institute of Jamaica

Past students of CC who contributed valuable personal memories of eisteddfodau 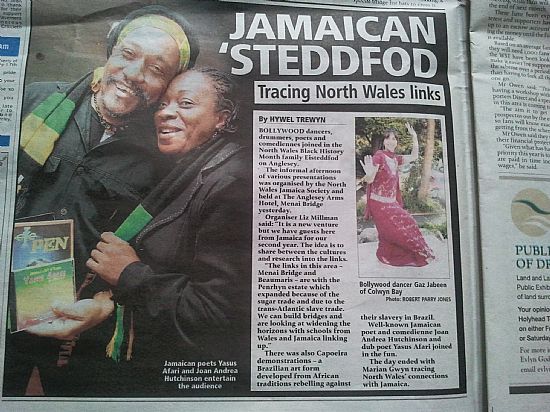 This event created a stir in 2011 when Yasus Afari and Joan Andrea Hutchinson took time to showcase a Jamaican Eisteddfod in Menai Bridge, Anglesey, with support from local Welsh talent!